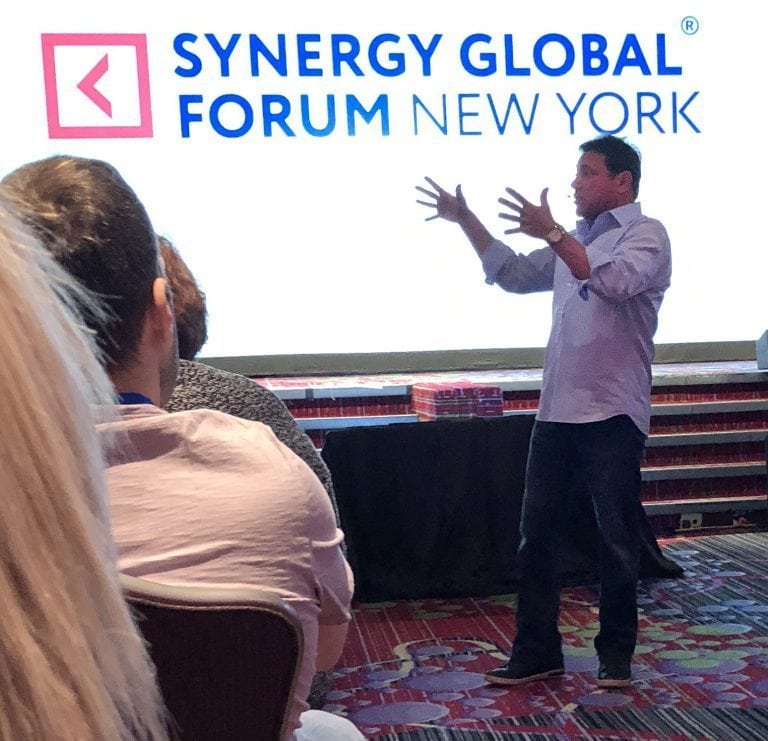 But without sales, you don’t have a business. So it’s something that you need to take very seriously if you are an entrepreneur.

Luckily, you can make it a lot easier for yourself, just like anything else in life, by understanding the core concepts and learning the necessary skills required to be successful.

I’m a huge believer in Always Be Learning.

Especially in today’s world of sales and marketing, the tools are changing on a daily basis, your tactics and strategies need to be flexible and adapt, and human behavior is rapidly changing which means you need to adapt your sales approach to how people now want to communicate and buy. 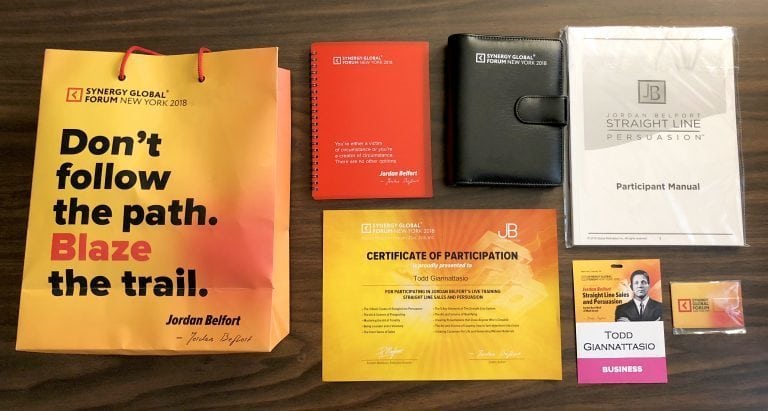 To give you some context into my thoughts about this training seminar with Jordan Belfort, I have a lot to compare it to, good and bad.

Since venturing out and becoming an entrepreneur in 2011, professional development and continued education has been a top priority for me. I go through a lot of training and courses. I’ve spent tens of thousands of dollars and countless hours over the years on acquiring and sharpening my skills. I’ve got dozens of certifications across the sales and marketing fields.

The Gorilla In The Room

First let’s address the gorilla in the room…yes, Jordan Belfort used his powers for bad.

He achieved a level of success he couldn’t properly harness and spiraled wildly out of control.

That doesn’t mean that his skill set and system are bad. They are just tools.

His tools are actually incredible. I’m not going to dwell any more on this or act as an apologist for him, he’s done his time and talked about his turnaround in other places.

Either way, his skill set can not be argued. It’s all about how you use it.

In Awe Of The Resilience

Second, you need to know this lead up story prior to the event.

10 days before, he woke up and had Bell’s Palsy!

Then, 3 days before the event, he woke up with laryngitis!

Despite that, he worked his ass off immediately going through speech therapy all day every day and getting injections in his throat to make sure he could show up, perform, and deliver at a world class level.

Aside from the few times he stopped himself and mentioned how frustrated he was by his slight slurring and speech impediment, it wasn’t really noticeable and he was delivering at such a high level, it was an insignificant factor in the event. Though I know those types of things get in your head and seem a million times worse.

So not only was he fighting through the physical limitations of Bell’s Palsy and laryngitis, but also all of that mental noise and insecurity about how he thought he sounded.

Watching someone deliver at a world class level, with those things going on, was really awesome in the true meaning of the word.

I was gonna start off this section by saying “the meat of the event” however, thinking back to it, the entire event was the meat.

This workshop started a little before 9:30 am and ended at 5:00 pm with a 2 hour lunch break, where Jordan presented to a small VIP group so he (and his voice) didn’t actually get a break.

There was no fluff or BS at any point. After his 3 minute intro story, it was off to the races.

The audience learned all about his Straight Lines Selling System that all but guarantees success.

How do you connect with someone and communicate with them in the first 4 seconds so that you earn their attention and respect for a full conversation?

What do you need to say, how do you say it, and when do you say it so that it makes sense to the person you’re talking to?

What are the key factors you need to achieve in a person’s subconscious belief system so that they would actually be happy to buy from you?

And the point that he drove home several times, probably every 15 minutes, how do you remain ethical throughout the sales process? How do you DISQUALIFY the wrong people so that you don’t waste anyone’s time trying to sell them something that they shouldn’t be buying?

The most important note to take home? Never go into a situation unprepared. Always be intentional with your actions. Have a script and know what you are going to say, the words, the tone, the timing, everything.

You can not wing it, or you are leaving your success up to chance.

These are just a few of the golden topics that he delivered on over the course of the 8 hour workshop.

It’s no surprise that this man is a world class presenter. But this was not a talking head keynote speech.

This was an 8 hour training workshop. Which is very different than being energetic and charismatic for an hour on stage.

His personality is what you’d expect from the reformed degenerate you saw in the movie, and likely of what you’d think of an entrepreneur from New York. Highly energetic, very engaging and active around the room, and of course cursing and one-liners that make a very conservative, politically correct listener in discomfort.

This mixture of entertaining presentation with the actual high level content is what makes an event worthwhile for the attendee.

Because value doesn’t come from what is sent out by an educator, but by what is received by the student. And if you have great information, but are dull and boring, it won’t be received fully.

And if you are a clown, sure the audience will have fun while in attendance, but they aren’t getting any practical value from that time.

This was not a typical talking head event where a speaker stands on stage and rattles off his information and stories and calls it a day.

It’s abundantly clear that Jordan is in this to make sure the audience gets as much out of the workshop as possible.

And it was a serious training workshop. The man put on a clinic.

He had slides on the screen at points to offer bullets of the topics he was diving into. Not uncommon.

But he also had several flip charts on stage and was actually drawing, writing, and educating like a teacher in a classroom.

He played video clips from the movie and broke down the sales call scenes like John Madden in his prime.

If you are serious about learning, not just going through the motions of absorbing information, this is exactly the type of event and teacher you should be looking for.

A Day With The Wolf

As a veracious learner who is consistently going through professional development training, I don’t say this lightly…

Jordan’s workshop was possibly the best I’ve ever gone through on any topic.

The content of what he teaches is elite. And he is possibly the best presenter/teacher I’ve ever seen in action.

I can’t wait to dig through my 10 pages of notes and start practicing and implementing this system in my businesses.

I’ll also be picking up his book today as a reference of more material to the things we went through in the training that I just couldn’t write fast enough for.

Don’t Miss Out On The Next Event Like This

Then you need to sign up as a Propelify Insider.

Click here to learn more and claim your free membership >>

*This article was originally published on TheGrowthSuite.com

This year, Propelify, powered by the NJTC, teamed up with Brex, a startup making waves for startups. Prior to Brex, founders were forced to use personal debit cards, often facing the risk of maxing out multiple credit cards. In 2017, Brex created a corporate card for founders of early stage startups that also removed the need of having it personally guaranteed.

Propelify has been acquired.

I’m proud to say that the NJ Tech Council (NJTC) has acquired Propelify and I have been appointed as the NJTC’s CEO.

How to Effectively Attract, Retain and Manage Millennials

Millennials are still looking for employment opportunities. Check out these tips to connect with them and learn how to attract, retain, and manage this important group.

Payless didn’t “trick” anyone as this headline reads: “Payless tricked ‘influencers’ into paying $600 for $20 shoes at fake ‘Palessi’ store” Nor did they troll