Understanding the Things in IoT Standards

The Internet of Things, a phenomenon poised to drastically change the way we live our lives and often referred to as the second Industrial Revolution, is, in its most simplistic form, extremely complex. At times I’m asked, from those who have never studied computer science or anything of that sort, what (coding) languages they should learn. I always try to push back and encourage them to focus their knowledge and domain expertise in something that usually comes as a surprise to most: networks. Understand how the internet works (especially now that net neutrality has been repealed). But be warned, it’s not easy.

In fact, according to the Pew Research Center only 6-10% of Americans actually know what “net neutrality” is…

And ¾ consider the internet synonymous to the world wide web – the “www.” you see in a url. That’s not the internet, that’s a protocol. An application protocol to be exact that sits on top of the TCP layer in the protocol stack.

It’s not the “internet” so much that’s of value as the actual framework that it comprises of. Understanding protocols (TLS, SSL, PPTP, etc), ISPs, encryption, tunneling, servers, clients etc is beyond the scope of this article, but in a nutshell, a lot of how the internet works, is how our neocortex (brain) works.

A diagram of the internet 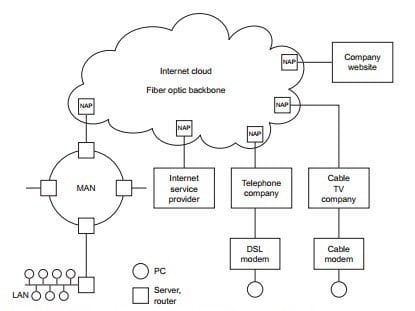 A diagram of our neocortex (and an AI)

The internet infrastructure operates in a routing hierarchy. The backbone, being made of Network Service Providers (NSPs) or Metropolitan Area Exchanges (MAEs), is connected through an actual wire (not a cloud). This wire could be fiber-optics, copper or occasionally, beam to satellites. NSPs sell bandwidth to smaller networks, such as ISPs which is what you’re most familiar with. Within that are layers of protocols that operate in a similar hierarchy to transmit data up and down the tree.

And at the center of all of this, is the human being who is making use of all the applications and services. IoT continues to extend its ability of data collection, smart networking, predictive analytics and deep optimization across interconnected people and every physical object in IT platforms around the world.

Like the hierarchies in our neocortex, our own creativity is capable of greater levels of hierarchy. Expanding our brain’s capacity, as Ray Kurzweil suggests, will reside in the cloud. Whether that’s through direct neural connection, or the way we do now, through devices.

These devices is what makes the Internet of Things. And it will triple by 2020, from 10 billion to 34 billion. Over the next 5 years, nearly $6 trillion will be spent on IoT solutions. But by whom? For what? And how?

With nearly every single individual being connected digitally, it’s baffling that so few actually know how this works. Perhaps it’s my curious nature to learn about the world I live in, or just have an insatiable fascination to how things work, I’ve noticed a lack of awareness and understanding not only among the general public but among industry experts as well, especially as it pertains to IoT protocols.

IoT is More Than Just Wearables

The Internet of Things is still widely misunderstood despite its ubiquitous prevelance in our lives. Businesses, being the top adopter of IoT solutions, are preceded by government with consumers lagging far behind. And although it is applied in nearly every industry, there are many unknowns. These unknowns, though exciting for the opportunistic entrepreneur, cloud our understanding of its implications (no pun intended). The most exciting thing about IoT is its myriad opportunities, which is only hampered by our imagination. It could generate not only new products and processes, but also new business models and whole new industries. But where to start with implementation for IoT startups is often the unanswered question many people perplex about. What we need from both a consumer and an enterprise standpoint is clear definitions.

IoT goes beyond “wearables”. In fact, the “internet” part is often overlooked compared to the “things” part. The main reason is due to the heaping complexities of technologies in charge of powering, connecting, securing and managing connectivity while also transmitting, receiving and understanding data. These components include:

But in the midst of it all, what we really need to be looking at, is not the internet nor the things, but the connected person.

What is Missing – Standards & Definitions to Design IoT Infrastructure

Jeff Voas, an NIST computer scientist explains the gap well when saying in this 2016 report that “there is no formal, analytic or even descriptive set of building blocks that govern the operation, trustworthiness and life cycle of IoT components.” Although there’s a glimmer of hope with IEEE’s P2413 “Draft Standard for an Architectural Framework for the Internet of Things”, the reality is, IoT is so complex that no single IoT standards organization has the possibility of being the sole entity to bring this all together. One possible way of understanding it’s complexities is grasping the “Network of Things” (NoT). An NoT, a simplified version of IoT, includes four fundamentals – sensing, computing, communication and actuation along with five building blocks called “primitives” that are core components of distributed systems. Additionally, there are six elements — environment, cost, geographic location, owner, snapshot-in-time and a unique device ID — that all play a role in an NoT.

Simplifying IoT at scale is a start but the market needs terms and definitions to understand every intricate facet of the IoT and understand what they actually do. For example, IoT protocols could be broken down into layers:

Only by defining clearly what each term is, the protocol and the IoT standards, can we begin to answer the question of how and where to implement IoT. As Einstein once said, if he had an hour to solve a problem and his life depended on finding the solution, he would spend the first 55 minutes to determine the proper line of inquiry.

IoT is hard. Like real hard. Launching an IoT startup is messy. It’s not just updating software. You’ll need to work with many organizations and vendors to complete an end-to-end system, which leads to some of the complexities associated with it. The software that is necessary to reach from the sensors to the enterprise requires experienced skill of embedded systems, connectivity, real time data, time series based systems, etc. Having a solutions architect and a systems integrator is a must to succeed but the challenges are no easy feat. And it’s further exacerbated given the lack of industry standards. This causes a series of confusion, complexity risk and lock-in scenarios, not to mention data breaches and security concerns. Which is often why IoT projects take a lot longer to implement than planned. Gartner predictions, 75% of IoT projects will take up two twice as long as planned.

Multidimensional collaboration is necessary. This should be across industries and markets, across previous research and formal standards development as well as market implementation.

If you’re launching an IoT company, make sure to figure out the function and then consider the below:

The last thing you need to consider before beginning is your prenup (no, not with your significant other, though I would encourage that as well). If for some reason you have to change out some of the components (hardware, software, network) within the end-to-end system, know what your options are where there’s a choke hold. Again, a lack of standards is why this is so complex.

Why is this important

In order to move an audience with a captivating speech, you gotta first speak the language. You need to understand the entire framework in order to examine the benefits and cost. IoT has predominantly 3 main goals: increase efficiency, improve health and safety, or create better experiences. But all of those could come at an extreme cost that’s ultimately not beneficial. You can have the best consumer product that changes lives drastically but if it’s expensive to build, forget about it.

Consumer IoT is really really hard. I should know, I’m doing it. And it’s been on the slower side of reaping massive amounts of success mostly because of the high cost and unclear benefits. Only 17 consumer hardware startups have gone public since 2012. Yet, $4.4B (a record deal) went into consumer hardware funding in 2016, mostly through crowdfunding sites like Kickstarter and IndieGogo because it enables entrepreneurs to raise money for concept designs or poorly functioning prototypes that would never pass VC. In reality, only 46% of them will succeed in raising even just one additional round of funding. And it makes sense when you have epic failures like Jawbone and Juicero. But despite the odds, as a founder of a smart shirt, I love these challenges.

The key benefit for Industrial IoT is monetary, which is why it’s been the quickest to take off. For wearables, in general, it’s self-tracking and personal data. Personal data being key. Eventually, smart watches will track out heartbeat, glucose levels, blood pressure and daily activity to provide useful insight. These insights, from a liability standpoint, is why we need to clearly define protocols, communicate pathways, local processing and storage, endpoints and standards. Only once we establish this, can we begin to ask the right questions and leverage Blockchain and machine learning to automate and secure our lives.

No comments to show.